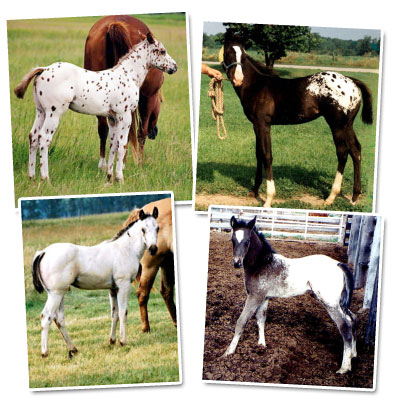 The vast array of coat patterns and interesting pigmentation variations exhibited by horses that carry the Leopard Complex or 'LP' gene (often referred to as the appaloosa gene) are an endless source of fascination for breeders and genetics researchers alike.

For most breeders, it's imperative to produce a quality horse that appeals to their chosen market. At the same time, being able to consistently produce horses with the most marketable coat patterns without compromising in other areas such as conformation, movement or temperament gives breeders an additional edge that can prove invaluable in today's market.

The Appaloosa Project investigates the genes and the interactions that produce the variety of appaloosa spotted coat patterns, and delivers the resulting knowledge to subscribers in everyday language through their electronic classroom and educational website.

By applying this knowledge to their own breeding programs and with the help of the DNA tests the Appaloosa Project team leaders and associates have developed, breeders can identify the crosses that have the best chance of producing their ideal coat pattern, leaving them free to concentrate on the remainder of the horse.

In 2013, following more then a decade's worth of research, the Appaloosa Project's discovery of the LP gene  was completed, resulting in the breakthrough DNA test for the LP mutation.

Fast-forward to 2015 and the Appaloosa Project team has now discovered the gene that works in conjunction with LP to produce the most extensive Leopard Complex spotting patterns. This gene, known as PATN1 (for "first pattern gene") tends to produce large amounts of white appaloosa patterning over 60 - 100% of the body.

This discovery and the results breeders are getting when they DNA test for PATN1 have kicked off an amazing amount of discussion among breeders and enthusiasts about appaloosa patterning.  For this reason, we've put together this breeder's guide to the LP gene to help the breeders of LP-carrying horses to work with Leopard Complex - LP and its modifiers like PATN1 - and ultimately, to make more informed breeding decisions.

It all begins with LP

For breeders of appaloosa spotted horses, LP is the key to unlocking the full suite of coat patterns within the Leopard Complex.  It is the LP mutation that must be present in order for characteristics and coat patterns to occur.

If we think of LP as a light switch, then having at least one copy of LP means that switch is "on".

Switch LP on and appaloosa characteristics are revealed. These include:

Having no copies of the LP mutation means the switch for appaloosa characteristics and coat patterns is "off".

Switch LP off and you're looking at a solid, non-characteristic horse.  This is what we refer to as a "true solid".  It's a horse that will be normally pigmented for its entire life, because the LP mutation is not there.

LP does not produce significant white appaloosa patterning all on its own. Instead, it appears to work in conjunction with a number of pattern-helping modifier genes.

Called "PATN" for short, it is these modifiers which determine the amount of white appaloosa patterning

How is LP inherited?

The LP mutation has an incompletely dominant effect.  This means that horses with one copy tend to have a different appearance than horses with two copies.  There are three possible genotypes or genetic recipes for LP-bred horses, shown here on a horse that has also inherited at least one copy of PATN1: 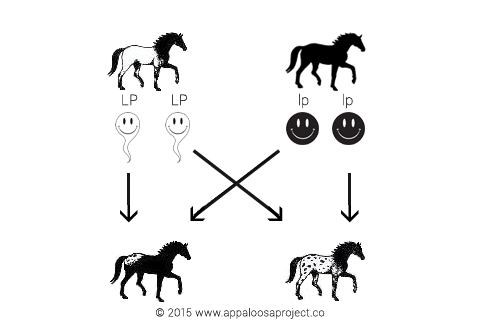 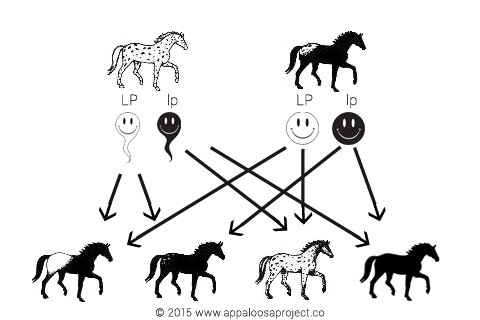 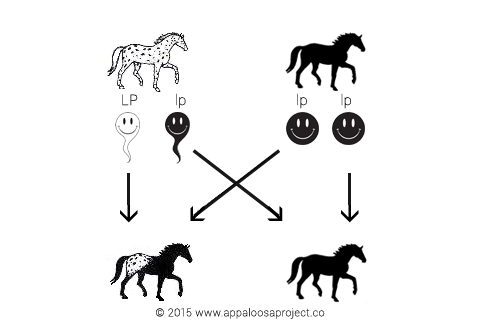 Recognizing a horse with LP

When there's a sizeable coat pattern to work with, it's often relatively easy to determine whether a horse carries one or two copies of LP based on physical appearance alone.  Horses with one copy of LP tend to have numerous darkly pigmented spots in their white patterned areas, while horses with two copies of LP tend to have few or no dark spots.

However, at low levels of expression, the job gets much more difficult, even for seasoned researchers accustomed to working from the phenotype (physical appearance) of thousands of horses.

There are many different genetic mutations that can cause white spotting in horses and this complicates phenotyping as some horses may appear to be homozygous for LP (no pigmented spots) but may only have one copy of LP.  Also  other white spotting and dilution genes can cause some of the same characteristics as LP, such as mottled skin, white sclera, or roaning and so their presence alone is not enough to definitively say in every case the cause is LP.

In all these instances, the DNA test for LP is vital to ensure you've correctly identified what's in your paddock. As you can see from the inheritance information above, get it wrong and you're faced with entirely different odds of producing your desired outcome so it's well worth the few dollars to test for the presence of LP.

Coat patterns within the Leopard Complex

The Appaloosa Project has developed its own classification system that distinguishes pattern types based on the genetic makeup (genotype) of the horse rather than being based solely on its physical appearance.

To breeders, this system is immensely valuable because it allows you to identify what a horse is capable of passing on to its offspring. This kind of identification is the vital first step towards stacking the odds of your desired outcome in your favor. Read our Breeder's Guide to Appaloosa Pattern Identification (subscription required).

In 2007, the Appaloosa Project's research confirmed what many breeders had suspected; that horses with two copies of LP are affected by a condition called Congenital Stationary Night Blindness, or CSNB. That is, they do not see in the dark.

Extensive information on CSNB (night blindness) is available within our free articles and resources.

Because appaloosa spotting is not caused by one single gene, it's a complex topic to come to grips with! Here are some of our most frequently asked questions:

Why doesn't my snowcap blanket stallion consistently produce foals with as much patterning as he's got?

At one time, it was believed that all a horse needed to inherit in order to have appaloosa patterning at birth was the LP mutation.  When it became known a few decades ago that fewspot and snowcap horses were homozygous for LP, many believed that what they saw was what they would get - that a blanketed stallion would produce a similarly blanketed foal.

Our study of the progeny records of dozens of stallions with snowcap blankets reveals that this simply is not the case.  The evidence suggests that blanketed patterning is produced by a host of small effect modifiers or PATN genes, each contributing only a small amount of white appaloosa patterning in conjunction with LP.

To date only one PATN modifier, PATN1,  has been identified to have a very large effect on the amount of white patterning on horses that inherit it, acts to produce a "big chunk" of patterning, usually affecting between 60 and 100% of the body. Pedigree records indicate that other modifiers only contribute small amounts.

Thus, a snowcap blanket stallion, who has a handful of independently inherited PATN modifiers, will tend on average to pass on only about half of what he has to a foal.  Unless there's help in the form of a contribution of PATN modifiers from the dam, most of the foals are bound to have lower white patterns than their sire, and many will have none at all.

I've read that the blanket pattern is caused by PATN2, is this true?

This question ties in nicely to the question above about why a blanketed stallion isn't consistently reproducing his own pattern, so it's worth repeating the key point: only PATN1, which has a very large effect on the amount of white patterning on horses that inherit it, acts to produce a "big chunk" of patterning, usually affecting between 60 and 100% of the body.

So, it's time to debunk the PATN2 myth… PATN2 is not the 'blanket gene'.

Instead, pedigree evidence supports that blanket patterns are instead caused by multiple small effect modifiers that each additively contribute 10% to the size of the blanket. The most likely explanation is the larger the blanket, the more of these modifiers the horse has inherited.

A future Appaloosa Project article will cover how to breed for blankets in detail. Can't wait? Subscribe to our electronic classroom or request a private, detailed analysis of your breeding program for a detailed guide to your best color-producing crosses!

Which breeds has the LP gene been identified in?

While LP is commonly referred to as the 'Appaloosa' gene, it has been confirmed by DNA testing to exist in a number of breeds around the world. As well as the Appaloosa, these include:

It is also thought to be present (based on phenotypes) in the Falabella, Spanish Mustang, Andalusian, Lusitano, Paso Fino and Karabair.

© 2015
This article is protected by copyright and it may not be reproduced in any form. If you'd like to share it with your readers, please link to it. Thank you!