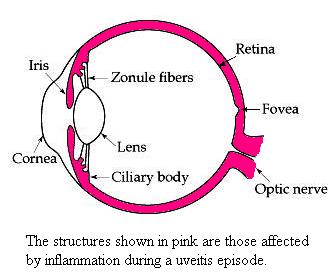 Equine recurrent uveitis (ERU) - sometimes called “Moon blindness”, iridocyclitis, or periodic ophthalmia - is one of the oldest known ocular diseases in the horse.

It is an acquired, progressive condition and the most common cause of blindness in the horse world-wide. What follows is a summary of ERU including what it is, what may cause it, how it is recognized, and how it is treated.

Before we discuss ERU specifically, we must introduce a couple of concepts.

Uveitis is a term used to describe inflammation inside the eye. This inflammation involves a portion of the eye called the uvea. The uvea is the vascular and pigmented tissue in the eye and is composed of three structures: the iris, ciliary body, and choroid. The iris is the coloured part of the eye and the only portion of the uvea that is visible without the use of special equipment. The ciliary body sits behind the iris and the choroid lies below the retina at the back of the eye.

Does uveitis have more than one cause?

Equine recurrent uveitis (ERU) is a disease complex characterized by recurring episodes of active uveitis. It is important to note that one bout of uveitis does not equal a diagnosis of ERU. The horse must have evidence for recurring episodes of uveitis to be diagnosed with ERU. This disease is one of the oldest known conditions of the horse. The term “moon blindness” comes from the early and incorrect theory that recurrent episodes were linked to the phases of the moon.

How often does it occur, and which horses are most commonly affected?

Equine recurrent uveitis is thought to have a prevalence of 8% in horses in the United States. (1,2) There appears to be an increased incidence of ERU in the Appaloosa breed. There have been no studies to investigate the prevalence within the Appaloosa breed alone, however, in one study of 112 horses with uveitis, 28 (25%) were Appaloosas. When this was compared to the number of horses without uveitis (10/260 were Appaloosas) the odds of finding uveitis were 8.3 times greater in Appaloosas than in all other breeds combined. (3) Appaloosas also have a greater risk of becoming blind from ERU compared to other breeds. (3)

Why does the inflammation keep coming back?

The initiating or underlying cause of ERU is usually unknown and the reason it recurs is also unknown. The inflammation is thought to be mediated by the immune system and may involve hypersensitivities to infectious agents such as those listed above. Leptospira interrogans is the most commonly implicated infectious agent associated with ERU. (4-8)

There are many theories as to why uveitis is recurrent and what the link is with Leptospira infection. One theory is that recurrent bouts of uveitis are due to continued presence of inciting organisms or antigen within the eye or to repeated exposure to inciting antigens. (4-7) An antigen is a molecule that stimulates an immune response (usually a protein or a polysaccharide).

Another theory is that an immune response against self tissue may be stimulated when the initial, inciting antigen is structurally similar to ocular tissues. For example, it is known that the equine cornea has antigenic similarities to Leptospira organisms (8). Neither of these theories has been proven conclusively and the truth may involve aspects of both. 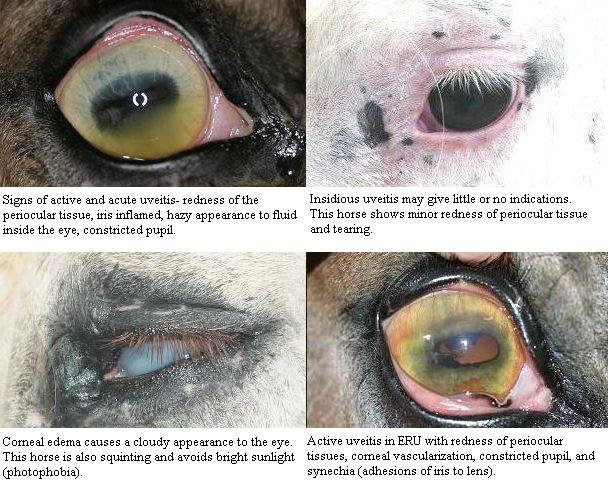 The signs of acute uveitis include signs of pain and discomfort such as squinting, photophobia and tearing. Additional signs that may be evident upon ocular examination may include redness to the tissues around the eye, corneal edema (cloudy appearing cornea), aqueous flare (murky appearance to the fluid within the eye), a constricted pupil and a low intraocular pressure. (1,2)

Consequences of repeated episodes of uveitis 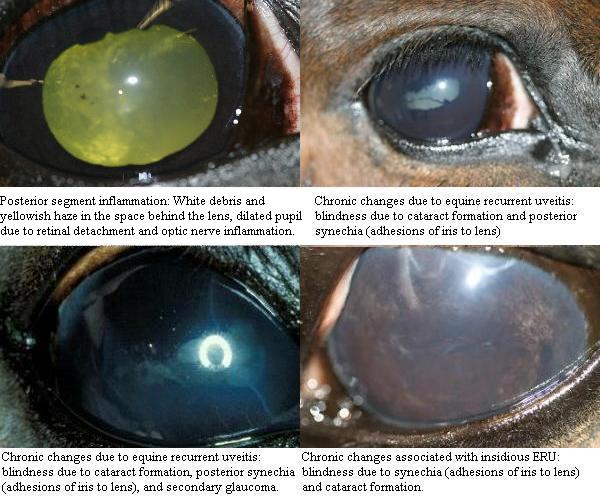 Common consequences to chronic uveitis or repeated bouts of uveitis include the formation of adhesions of the iris to the lens (called posterior synechia), changes in the iris color, pigment deposition on the anterior lens capsule, and cataract formation. Posterior segment inflammation including that of the vitreous, choroid, optic nerve, and retina are also frequent. These changes are progressive and eventually lead to blindness. (1,2).

The three common clinical syndromes observed with ERU are:

Classic ERU is most common and is characterized by active inflammatory episodes in which the signs of acute uveitis are seen, followed by periods of minimal inflammation. After repeated episodes of uveitis, the active episodes of uveitis become more frequent and severe and ultimately blindness results from the consequences of inflammation described above. (2)

Insidious ERU is characterised by a low-grade inflammation that never completely resolves and gradually progresses to chronic signs of ERU. Horses with this form of ERU may not show over ocular discomfort and owners may not recognize the presence of disease until blindness results.Unfortunately, this type may be more frequent in the Appaloosa than in other breeds. (2)

Posterior ERU is characterized by more prominent inflammation in the posterior aspect of the eye (the vitreous, choroid, retina, and optic nerve). This form can also be difficult to recognize, as signs of discomfort may be mild, but blindness occurs chronically. (2)

Therapy for active uveitis should be aggressive and prompt in order to reduce discomfort, minimize the consequences of inflammation, and preserve vision. The veterinarian must be involved in order to provide proper treatment. Consultation with a veterinary ophthalmologist, specialised in eye diseases, may also be necessary in some cases.

Specific prevention and therapy for ERU are difficult because the underlying cause is usually not defined. Systemic nonsteroidal anti-inflammatory medications are used in conjunction with topical steroids to control the ocular inflammation, and atropine is used to relieve painful intraocular muscle spasm as well as to dilate the pupil which reduces the development of posterior synechia. (1,2) Therapy should be gradually tapered as clinical signs resolve. Ocular implantation of sustained-release cyclosporine delivery devices have reduced the rate of recurrent ERU episodes, however, these devices are not commercially available at this time. (9,10) Surgical vitrectomy has also been reported to reduce recurrences of ERU. (11) These therapeutic options may become important tools for long-term treatment of horses with ERU.

In general, prognosis for ERU is guarded to poor as recurrences are expected and with each inflammatory episode more damage is done within the eye. It is important to note that most cases of ERU become bilateral with time and most eventually lead to blindness. Unfortunately there is no cure for ERU at this time. Close monitoring for signs of discomfort (squinting, photophobia, tearing) is needed to catch the phase of active inflammation, and prompt veterinary intervention should be sought whenever these are seen.

5. Wollanke B, Rohrbach BW, Gerhards H. Serum and vitreous humor antibody titers in and isolation of Leptospira interrogans from horses with recurrent uveitis. Journal of the American Veterinary Medical Association, 2001; 219: 795-800.