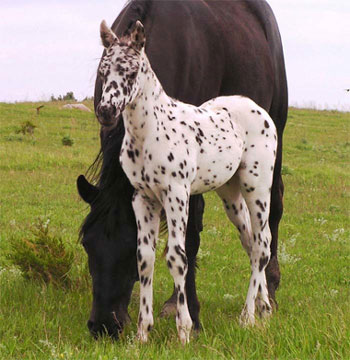 Since the discovery of LP, the main gene that controls appaloosa spotting patterns and associated traits, breeders have been anticipating DNA tests for the genes that work with LP to produce white appaloosa patterning.

We are happy to announce that the white pattern modifier gene with the largest pattern causing effect, termed Pattern-1 for “first pattern gene” or PATN1 for short, can now be DNA tested for.

A mutation in PATN1 was identified that is associated with increased amount of white in LP horses. This mutation (in combination with LP) behaves in a dominant fashion which means you only need one copy of the PATN1 mutation to observe large amounts of white as long as LP is present.

In terms of physical appearance, horses that are heterozygous for LP (LP/N) and that have inherited at least one copy of the PATN1 mutation tend to exhibit a leopard or a near–leopard pattern.

In horses that are homozygous for LP (LP/LP), the PATN1 mutation (in one or two copies) most often results in a few spot or near-few spot pattern. 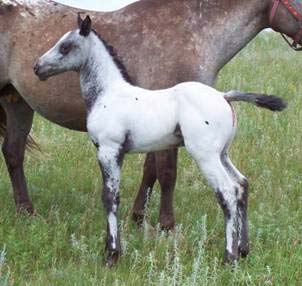 For breeders, the ability to test for PATN1 represents a huge advantage.  For example, if two leopards are mated (both heterozygous for LP and both carrying at least one copy of PATN1) they have a 25% chance of producing a horse without LP.

Without LP, the “on switch” for appaloosa patterning, there is no way to tell by looking at the horse if PATN1 is present and a valuable breeding animal maybe overlooked.

DNA testing will enable breeders to know if this horse has PATN1.  Animals without LP but with PATN1 can, when bred to horses that are homozygous for LP, produce loudly patterned spotted offspring.

In addition, breeders can now test their leopard and fewspot horses to determine which ones are homozygous for PATN1 and thus could be more valuable to their breeding programs.

How to DNA test for PATN1

To access the DNA test for PATN1, go to UC-Davis Veterinary Genetics Laboratory.