Search online and you'll find some websites promoting a gene called PATN2 as the blanket causing-gene in Appaloosas, Knabstruppers and other spotted breeds. If only it were that simple!  The reality is that breeding for blankets is a little more complicated...

The evidence says that there is no 'blanket gene'

In fact, pedigree evidence shows very clearly that no single gene is responsible for blanket patterning. Instead, the data we've gathered supports the idea that blanket patterns are caused by multiple small effect modifiers, each contributing a little to the size of the blanket. The most likely explanation is the larger the blanket, the more of these modifiers the horse has inherited.

Together, these small-effect PATN modifiers give rise to a range of patterning anywhere from just above 0% (eg. one white fleck on the rump at birth) to such extensive patterning that the horse might be mistaken for a leopard or a fewspot (except that it’s missing critical PATN1 identifying traits).

The clues in inheritance - PATN1 vs small effect PATN modifiers

First, let's review how the inheritance of PATN1 works.  PATN1 is a large effect white pattern modifier that, when inherited along with LP, is capable of producing a sizeable coat pattern without the assistance of any other PATN modifiers.  It is the only large effect modifier that our studies reveal evidence for.

PATN1 typically produces white appaloosa patterning over at least 60% of the body on full sized horses with LP (on average, miniature horses tend to exhibit lower pattern levels).  This large amount of patterning made PATN1 relatively easy to track down, as it follows an inheritance pattern that reveals that it is either inherited or not and when it is, it produces a predictable appearance.

Here are the coat patterns typically produced by PATN1, shown on full sized horses with one copy of LP (LP/n):

Now that we can DNA test for PATN1, we can confirm that this gene is the essential ingredient to produce the above phenotypes (physical appearances).  Fewspot, near-fewspot (LP/LP) as well as leopard and near-leopard (LP/n) horses all have at least one copy of this large effect PATN modifier.

PATN1's large effect on white patterning made it easy to find.  In studying the progeny of fewspot stallions with the genotype PATN1/n LP/LP crossed to mares with very little or no patterning, we can see what the stallion is contributing to his foals. In this type of cross LP is inherited by every foal, but only 50% of the time do they also inherit a copy of PATN1.  This means half of the progeny inherit a leopard/fewspot or near-leopard/near-fewspot pattern level similar to that of the stallion's, with the other half inheriting very low amounts of white patterning, similar to the mare's.

When we graph the white pattern levels of the offspring of this type of cross, we get a bi-modal distribution where the 2 different outcomes are shown in 2 distinctive peaks: 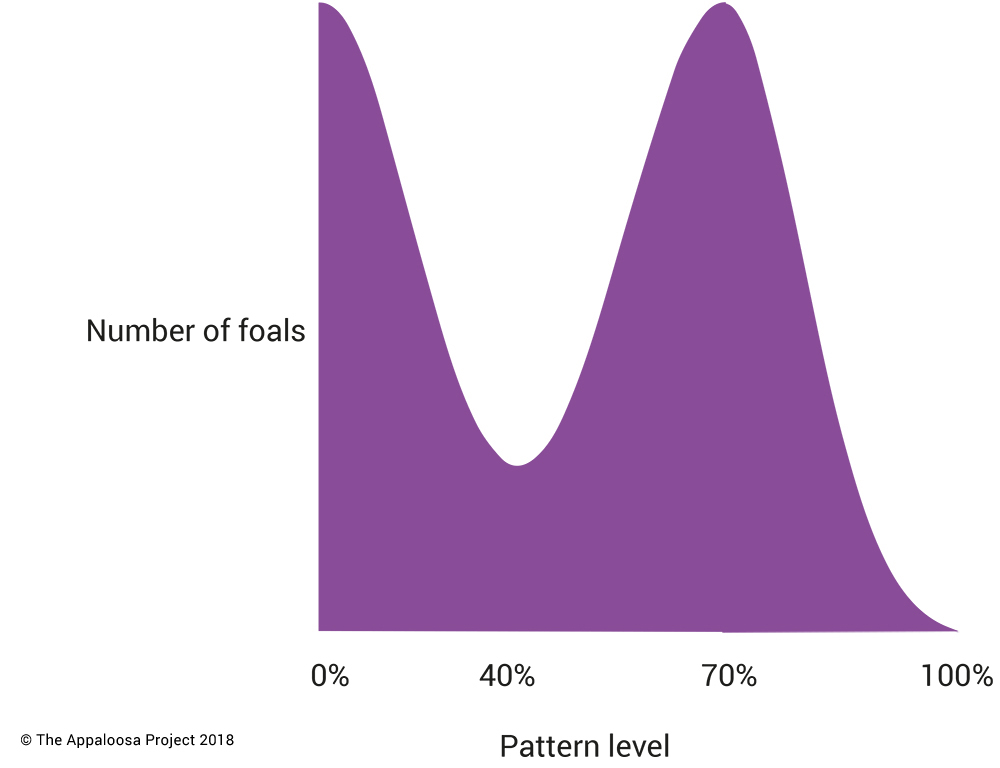 In contrast, when the stallion is homozygous for both PATN1 and LP, all of the progeny inherit LP and PATN1.  Here's what a graph of the white pattern levels of their offspring looks like: 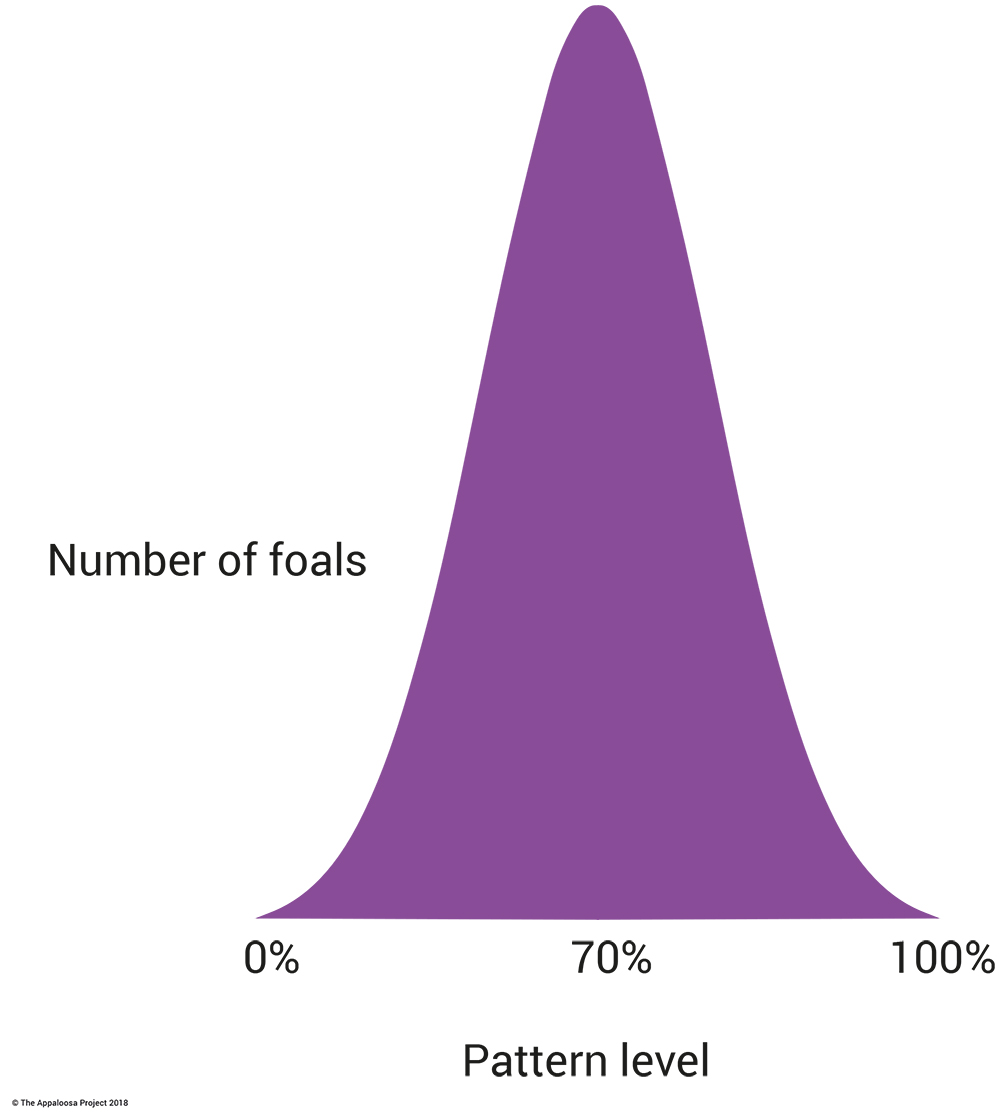 Notice that the single peak, illustrating that the greatest number of foals exhibit a pattern level covering about 70% of the body, is identical to the right hand peak in our bi-modal distribution above. This shows us there's just 1 possible outcome in this cross, rather than the 2 we can see above, where half of the offspring have not inherited PATN1.

Studying large numbers of progeny from blanketed parents confirmed by DNA not to carry PATN1 reveals to us that blanket inheritance is highly variable, ranging from a few white flecks at birth to patterning covering nearly the entire body.

The best way to observe how the inheritance of blanket patterning works is to look at the white pattern levels of foals sired by snowcap blanketed stallions (LP/LP, n/n for PATN1), out of Appaloosa mares who have little or no white patterning themselves.  As with the study of the inheritance of PATN1, we look at foals out of low and no pattern mares because they normally do not have much by way of white modifiers to contribute to the equation, which we have been able to confirm by collecting many observations of this kind.

Here are the coat patterns typically produced by modifiers other than PATN1, shown on full sized horses with one copy of LP (LP/n):

Now, let's look at the white pattern levels of the foals by these snowcap stallions, in a graph: 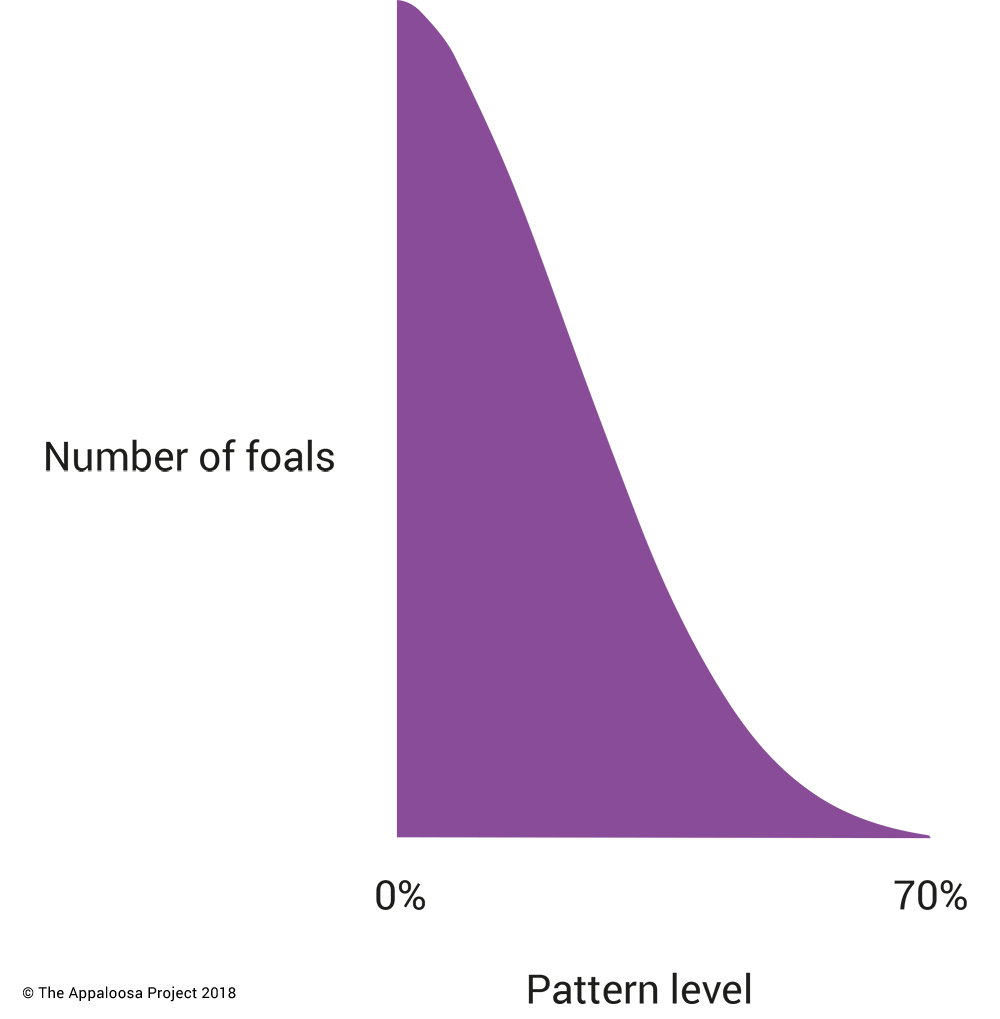 In stark contrast to our graphs showing PATN1 inheritance above, foals born with 70% patterning are rare.  The largest number of foals by these snowcap blanketed stallions (n/n for PATN1) out of low or no-pattern mares have a small coat pattern, covering 0% to 40% of their body.

This outcome is strong evidence suggesting that horses without PATN1 owe their white patterning to a number of small effect PATN modifiers. At the peak of the curve are foals that have inherited few or no PATN modifiers and at the tail approaching 70% white patterning are the few who inherit everything that both parents have to offer, giving them a large coat pattern.

A "blanket gene" would give us different outcomes

A vital clue to what's going on with inheritance of white patterning in blanket-breeding crosses is that horses with extensive blankets do not consistently reproduce their own pattern appearance, when bred to mares with little or no white patterning.

If producing a blanket was as simple as inheriting a blanket gene called PATN2, then the progeny graph of snowcap stallions would show a bi-modal distribution, like a horse with one copy of PATN1. We would see 1 peak at 0% coat pattern and a second peak at a higher pattern level, similar to that of the stallion.  That would mean half of the foals inherited the "blanket gene" and exhibited about the same sized coat pattern as the stallion's, and the other half did not.

But this is not what we see.  Instead, horses with large blankets bred to mares with little or no white patterning have offspring that range from 0 to to 70% patterning, as shown above.  Why?  This is the type of curve that a polygenic trait produces.  Polygenic literally means "many genes", and many common traits work this way, for example height at the withers.  When it comes to height, we see that lots of genes contribute to the trait, with crosses between tall and short parents giving a wide range of possible outcomes.

White patterning in LP breeds is the same - with the exception of PATN1, which happens to have a larger effect than other PATN genes do.  That's how we found PATN1 - its presence is obvious when we look at the offspring of PATN1/n stallions.

When you look at a horse with a blanket, and you know it doesn't have PATN1, what you are actually seeing, though its patterned area looks continous, is white patterning created by several contributing components, each producing perhaps 10% to the area of the blanket.

The same small effect modifiers that create blanket patterns are what help raise the pattern level of a horse with PATN1 up above 60% (the amount of white patterning PATN1 makes on its own) into the high end of the pattern range, to reach a full-body amount.  In other words, they are absolutely essential in a leopard breeding program, to push near-leopard up to nose to toes.

Our research into the small effect PATN modifiers is ongoing and, as they're identified and located, they'll become known as PATN2, PATN3 and so on. We hope that some day, we'll be able to give breeders the ability to DNA test for these modifiers, so they can determine the potential for a particular horse to produce the type and amount of pattern they are aiming for.

In the meanwhile, subscribers can access the most up to date information we have available on exactly what to look for when considering how to stack the odds of producing their desired outcome, even without having DNA tests for these small effect modifiers available!

Join us for access to our subscriber series on breeding for blankets as well as to our electronic classroom, where you can not only read extensively about blanket patterning and some of the modifiers we already know to boost and suppress white patterning but also ask questions about horses in your own breeding programme and what to look for in your ideal cross.

© 2018
This article is protected by copyright and it may not be reproduced in any form. If you'd like to share it with your readers, please link to it. Thank you!