The following diagrams are provided as a visual aid to understanding the various possible outcomes in an Appaloosa breeding program, according to the genetic status of the parent horses used. The crosses presented here represent various options available to breeders.

Note that only the inheritance of LP is illustrated. All horses are shown with an average amount of white patterning. Therefore, heterozygotes (LP/lp) have spotted blankets and homozygotes (LP/LP) have snowcap blankets.

The actual amount of white patterning that might occur from these crosses is not displayed, since showing a more realistic picture of possible phenotypes could potentially confuse the reader. All that is being attempted here is to show whether or not the resulting offspring of a given cross will inherit one, two or no dominant copies of LP.

This horse's spotted pattern indicates it is a carrier of the LP mutation, but is not affected by CSNB – it is NOT night blind.

This horse has a coat pattern indicating it has two dominant copies of the LP mutation, and is therefore affected by CSNB – it is night blind.

This horse has two normal, recessive copies of the LP gene. It shows no LP-caused traits of any kind over its entire life, never developing any characteristics or patterning.

Since it doesn’t have any copies of the LP mutation, it is not affected by CSNB and cannot pass it on to its offspring. May be a true solid Appaloosa or a non-Appaloosa.

Diagram 1: Probable Outcomes for Heterozygous by Solid or Non-Appaloosa Cross 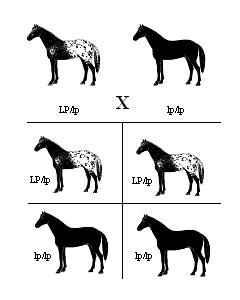 This Punnett square diagram shows the possible breeding outcomes for a cross between a heterozygous Appaloosa and a non-Appaloosa. Note that no CSNB-affected foals can result from this breeding. However, one can only expect LP to be inherited 50% of the time. The other half of the time, foals produced will not inherit LP in dominant form, and will thus be true solids (lp/lp).

Though this cross avoids production of CSNB-affected foals, it also only offers a 50% chance for the occurrence of a foal with Appaloosa traits and coat patterning, with an equal probability of true solid foals with limited market appeal. 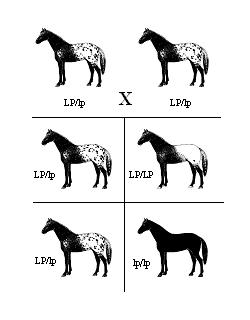 The heterozygous x heterozygous cross is the most common cross being performed in Appaloosa breeding programs today. As the above diagram shows, there is a 1 in 4 chance of producing a CSNB-affected foal when breeding heterozygous (LP/lp) horses to each other.

Although this diagram shows the CSNB-affected offspring as having a snowcap pattern, this foal could in fact have any amount of patterning, from 0 to 100% over its body, depending on what it inherits from both parents in terms of white pattern causing modifiers.

This means that not all homozygous (LP/LP) foals will necessarily end up with enough white patterning at birth to be identified by pattern. Only when selection for large amounts of white patterning takes place consistently over several generations is this likely to be the case. Highly patterned horses are not only easier to identify as young animals, they have increased value as marketable horses for sale or breeding purposes.

Diagram 3: Probable Outcomes for Homozygous by Solid or Non-Appaloosa Cross 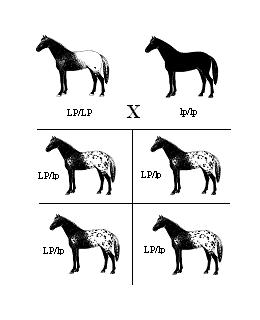 The mare in this cross is either a true solid Appaloosa or a non-Appaloosa. The stallion is a snowcap blanket that is homozygous for LP, and is therefore affected by CSNB – he is night blind.

All foals produced inherit only one dominant copy of LP, from the sire. Note that since no foals produced are homozygous for LP, this cross cannot result in CSNB-affected offspring.

This may be considered an ideal cross, if one's goal is to produce as many marketable foals as possible. First, in terms of coat pattern this cross produces only spotted patterning. If one is conciously selecting for moderate to extensive amounts of white patterning, the foals produced will have spotted blanket or leopard appearance. Second, none of the foals produced are affected by CSNB, which may enhance their appeal to potential buyers.